So my new Pittsburgh and Columbus paintings are completed and available on my Etsy Store.  Its been a fun challenge to try to set these up and complete them, but I’m pleased with how they have come out and all that I’ve learned in creating them. 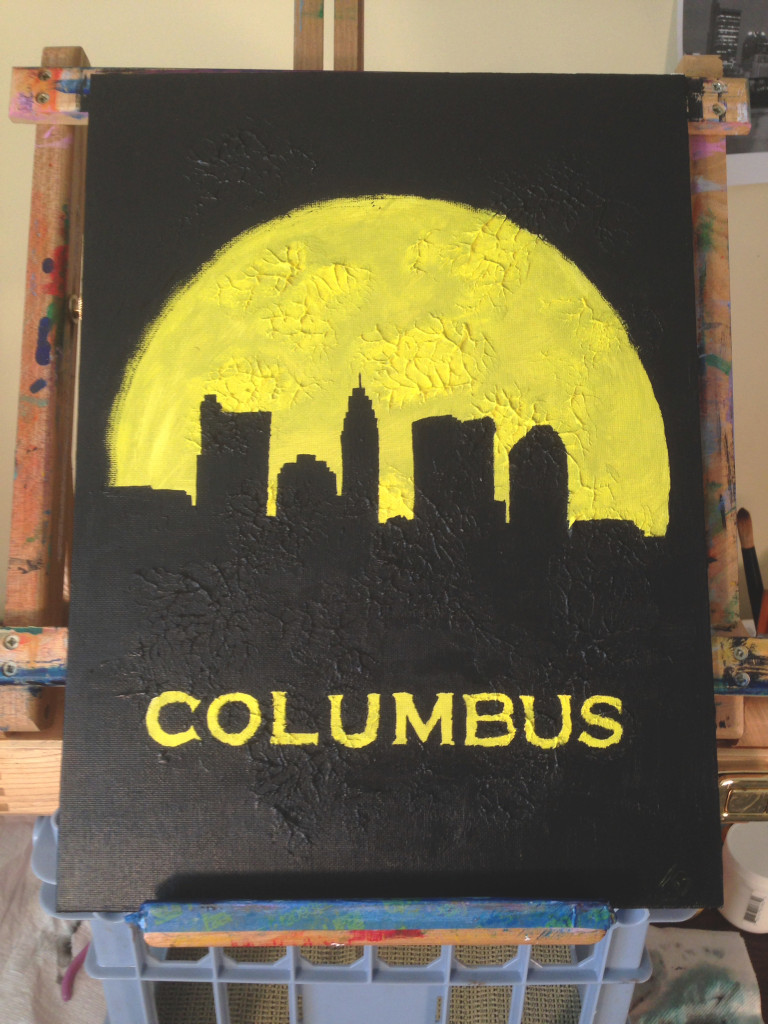 The skyline of my city in one of the home town color sets. 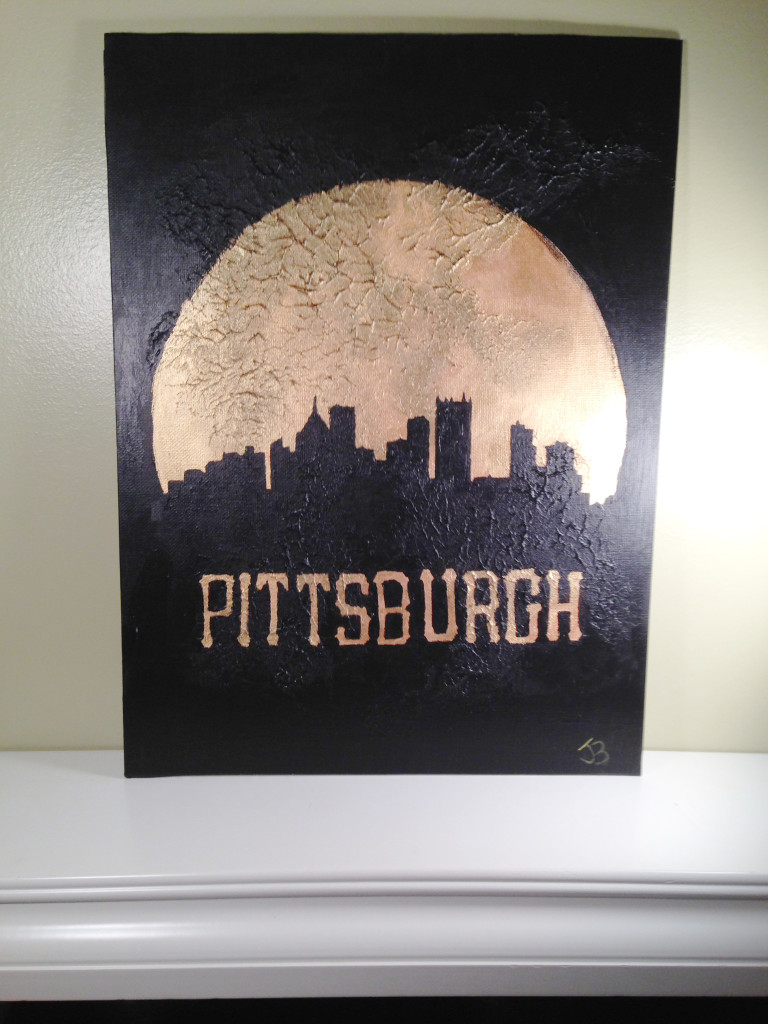 My parent’s hometown skyline silhouetted against a golden moon. 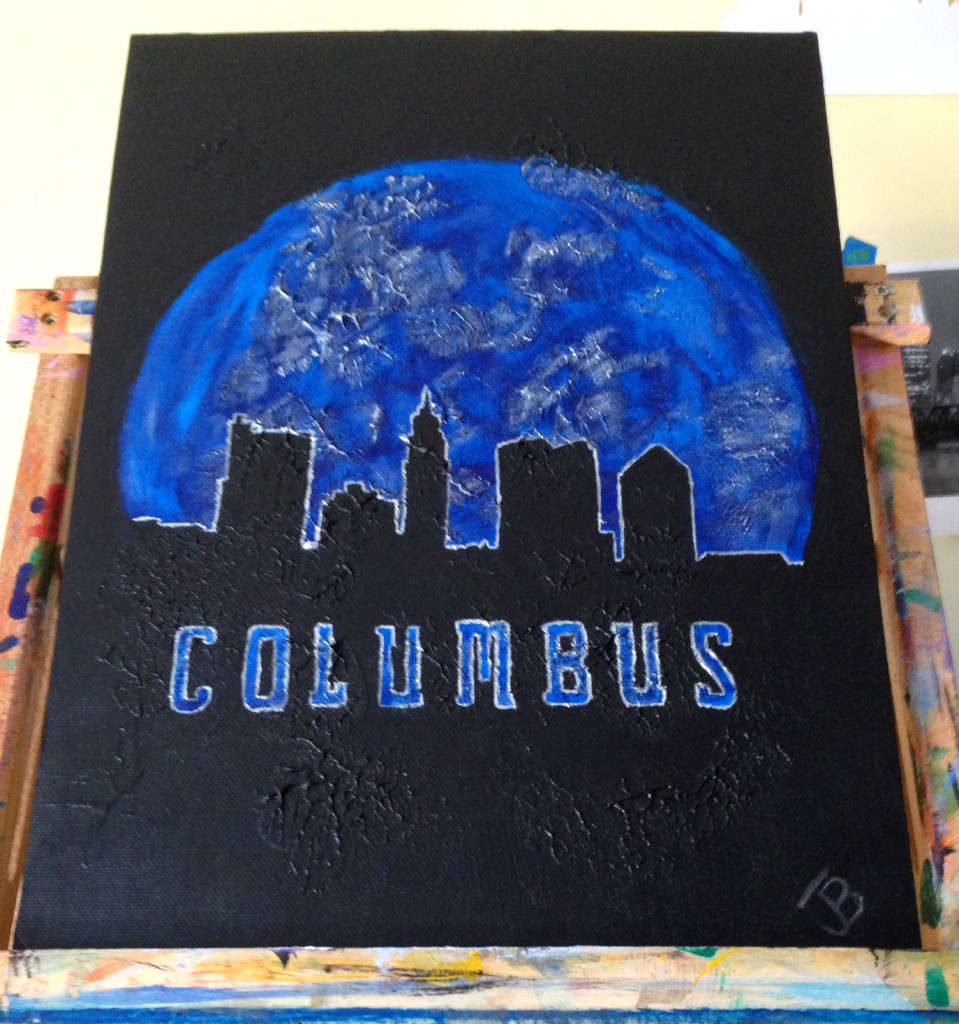 Here is the second of my home city paintings. Blue and silver with an outline for contrast.

Meditation II from stressed to relaxed in less than 6 minutes

So these meditations have been a while in coming, but I’m happy to say that I have learned a lot in the meantime. I found out how to use my audio editing program (Audacity) to create not only the binaural beats, like the ones from the first meditation, but now I have found out how to create ramped isochronic tones.  The below program goes from 14Hz down to 4Hz (over time thus the ramping part) or from the brain wave signature of an active person down to the equivalent of deep sleep. Again I cannot say that I’m fully sold on all the hype that surrounds them, but I have used isochronic tones for meditation significantly over the past two years to great personal effect.  They will only be effective with head phones and do not  listen to the meditation with the isochronic beats while driving.

Just my keyboard, someone’s amazing nature audio recording and me.

All that with the isochronic tones

Just a quick note to let everybody know I’m still out here and busy.  I’ve been working on a number of paintings and I hope to have them all completed next week. Two of them will be Columbus skylines one will be another Pittsburgh skyline and the 4th is an abstract that started with a new medium that I was trying that, while not working as I had thought it would initially, created a very interesting effect that inspired me to create another abstract piece. I also am in the final post production of my second meditation and may have that completed tomorrow.

I’ll have pics and links to audio up as soon as they are ready!

A quick note about my Etsy Store

I’ve added two new pictures for sale at my Etsy store, Artistic Avenues Explored with Joy.  I’ve sold two similar pieces in the past and they have become one of my favorite things to paint. If you have time, check them out and let me know what you think!

First off I’m an IPA fan, double IPA’s in particular (Untapped username Ipawesome is a dead giveaway I guess), but this list is being compiled for other purposes.  I’ve been asked to share a recommended purchase list for one of my brothers and his buddy.  They have both the fortune and misfortune of living in the Keystone state.  Fortunate for having some of the best sport teams in the world, the consistent black and gold symbolism being shared by all and for living close enough to me that I visit when they are nice.  The problem with the damn state is that some sort or weird medieval beer selling laws make it so that you have to buy 24 beers at a time.  Now fine, maybe selling double deuces of OE to anyone who walks in like we do here in Ohio is a recipe for roadies, but seriously? A whole case?

Anyway, they are not HopHeads like myself so I will only say that if you see Three Floyds you buy Three Floyds, I’ll see you over the holiday’s and will buy it off you ;-).  Without further ado here is the best of the not so hoppy:

Ovila Quad from Sierra Nevada– I’m not sure this is still in production so if you see it get it.  It’s a Belgian quad and a powerful one. It’s pretty much champagne bubbles and deep rich flavors.  As with most of this list take care when drinking, it’s not for the kids.

Claymore Scotch Ale from Great Divided Brewing Co. – It’s named after a two-handed sword, which after tasting it make sense.  It’s big bold and powerful, another name for Scotch Ales is Wee Heavy which this for damn sure is.  Its sweeter than you’d think and with a lot of alcohol flavor notes.

Ace Perry Cider from Ace Cider – So this is my favorite cider I’ve had.  Its apple and pear juices, it’s only 5% ABV,  its light, its refreshing, the ladies like it… you get the picture.  In a world where most ciders aren’t really worth it (and give me heart burn) this one stands out.

D.O.R.I.S. the Destroyer Double Imperial Stout from Hoppin’ Frog Brewing Co. – Its another pallet crushing good time.  A Russian imperial stout that is thick and sweet and magical.  Normally found in bombers this Akron brew is part of a family of wonderfully over the top beers that  are usually so hopped up as to not be contenders on this list, but the Destroyer here is a true stout.

Narwhal Imperial Stout form Sierra Nevada – So even if there weren’t a fantastic Buddy the Elf reference embedded in my link this would still be a recommended beer.  Its chocolate and hops and roasted goodness with enough alcohol taste that you won’t forget it’s a 10.2%er.   Another Russian imperial that will knock your socks off.

Winter Warmer from Brew Kettle – At 8% it may be one of the more drinkable of the selection I’ve made thus far.  The cinnamon, ginger and citrus notes are all ridding on a solidly sweet honey, malty and sugary base.  It’s a lot of flavors, but stays balanced. One of my favorite of the season.

Midas Touch from Dogfish Head Craft Brewery – I’m just gonna quote the Brewer on this one:

“This sweet yet dry beer is made with ingredients found in 2,700-year-old drinking vessels from the tomb of King Midas. Somewhere between wine and mead, Midas will please the chardonnay and beer drinker alike. ”

Its as magic as it sounds and I just found out that Dogfish Head has a Fish Finder so you can find their beers!

While I’m talking about Ancient Ales from Dogfish Head…

Theobroma from Dogfish Head – Again it seems silly to not just let the brewer speak for themselves:

“… a celebration of chocolate, was the next Dogfish Head collaboration with Dr. Pat. Based on the chemical analysis of 3,000-year-old pottery fragments found in Honduras, Theobroma is brewed with artisanal Askinosie cocoa, honey, chilies and annatto.”

The flavor is sweet and hot and wonderful.  Also looks like this one could be hard to find, but well worth it if you do.

Gumballhead from Three Floyds – I forgot about this American pale wheat ale until I started reviewing my Untapped list for this post. I generally despise wheat ales, if they are great they get a 3 out of 5 from me, this got a 5.  As the brewer says its an American Wheat that doesn’t suck.  Its not hoppy (a rarity for Three Floyds that I’ve had), but its just as complex and non-standard as you would expect.

Domaine DuPage French Style Country Ale  from Two Brothers – At 5.9 APV it’s not gonna kill you and as great as it is you’ll be glad you can have a few.  Its sweet, but with a fresh finish so you never get overwhelmed by the sweetness.  It’s distinct from every other beer on here and should definitively be on your list.

Ten FIDY and G’Knight from Oskar Blues Brewery – Oskar cans their beers.  Craft beers in a can seems crazy?  Yep, that’s why they do it.  Even in the eccentric world of brewers these folks are a bit off the wall and they like it that way.  The first is a super charged alcoholicy stout.  One in a night is enough, but it is quite good.  The second is a double-red IPA.  May not be a non-hoppheads dream, but it is a red so there is more balance than one might expect.

Winter Ale from Rivertown Brewing – Just had this for the first time last week.  A great representation of a winter warmer.  The spices over top of a solid sweetness.  Its exactly what I like about the style.

Mango Kombucha from Luna Kombucha -  This one makes the list as one of my change of pace beverages.  It’s a light refreshing tea beer with a mouth feel like champagne and a sweet, but not cloying taste.  It was made for day drinking in summer and I hope I get a chance to prove my self right about that in a couple months.

Well that’s all for now. Hope this gets you started off on the right foot at least and when in doubt check the ratings because there is nothing worse than paying top dollar for something you end up putting down the sink.

May the APV be ever in your favor…